We have already seen Netflix’s new superhero movie, a German film titled Freaks: 3 Superheroes. This is our review of the product that is available in the catalog of the streaming platform!

In a superhero market as crowded as the current one, the arrival of the movie Freaks: 3 Superheroes on Netflix was one of those products that could go through the catalog without disheveled and without attracting excessive attention.

Freaks: 3 Superheroes is curious. It may not be the fairest word to refer to it, but it is truly curious. It has a plot, at least, attractive enough to make you spend the (barely) hour and a half that it lasts showing a certain interest. And that, unfortunately, fails in the execution of the said plot and makes the rest of the elements that revolve around it not on par with the story and it looks like an empty film, devoid of emotion and with an absence of truly suffocating soul. This movie could have worked better as a Netflix series. 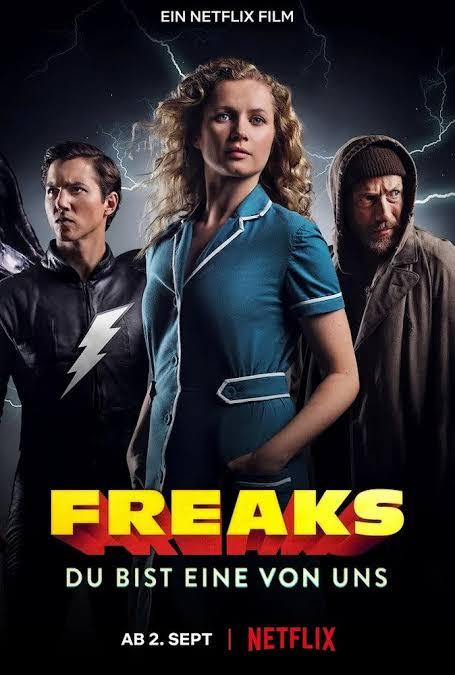 Felix Binder, a filmmaker accustomed to German television series and with only a short film and a spin-off of one of his series under his belt, is much more comfortable with the serial format than with that of a feature film.

Therefore, the plot revolves more around the thriller than the action itself; feeling like an unpretentious film for the whole family. With a couple of characters whose inner conflict could have been explored in more depth. But that does not have any interest to develop. Since the film prefers the back and forth of scenes instead of the psychological construction of the agents of the game. It is seen as a radically different vision of superhero cinema. But neither does it risk enough nor does it have the overflowing imagination that it aims to achieve in its early days.

No element feels truly pure in the film. She feels limited and, at the same time, wants to play in the big leagues; erring on the small side by covering more than necessary. And feeling excessively overwhelmed by both the genre and the selected story. There is nothing in this Netflix original product that can surprise the viewer; nor is there anything that stands out above its competition.

In short, it is a film that we could consider failed within its own nature. It works as entertainment and serves as an excuse that its duration is not excessively long. An attempt by superheroes in Germany within Netflix that has not turned out as it should have; but not all movies have to be perfect. With terribly superficial character development and a rather poor action that could have been much more limited. But that aspires to great things with an inappropriate ambition.

A film that shows itself for its interesting plot, but that fails to execute it. With characters with poor development and lacking emotion and soul. It fails where it does not have to fail and ends up being an empty product in a market as crowded as that of superheroes.

Freaks: 3 Superheroes Full HD out there for complimentary download online on Mejortorrent and different Torrent sites

The film has become the newest target of piracy; has been leaked online for free of charge HD downloading on piracy sites. However, this can be not the primary time, the piracy website leaked a movie or a show.

Several strict actions against the website are taken within the past however it’s been found that the team behind the site seems with a replacement domain each time the present Mejortorrent site is blocked. If they’re prohibited, they take a replacement domain and runs the pirated versions of the films. Within the case of the massive theatre releases; it is understood to leak the films simply a couple of hours once the films have hit the screens.